The air in the crowded emergency ward was already thick with the rusty smell of dried blood when the door burst open and two men barged in, screaming for help.

Between them, they carried a third man: barefoot, bare-chested – and bleeding freely from a deep wound which had nearly severed his right arm.

Two doctors ran over to help; one examined the wounded man while the other told his friends to go and find bottled water and sutures; there were none left in the hospital.

The nationwide blackout which struck Venezuela on 7 March caused chaos across the country, paralyzing airports and hospitals, cutting phone and internet services, and shutting down water supplies.

But nowhere was the havoc as intense as in the country’s second city, Maracaibo, which was convulsed by a wave of looting and violence on a scale unseen for decades. 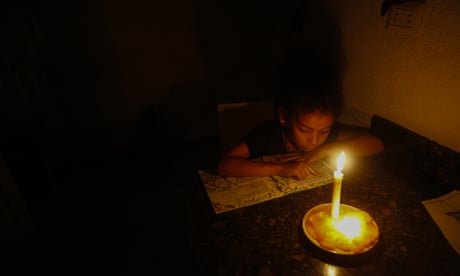 According to the city’s chamber of commerce some 500 businesses were sacked in the unrest, and countless people injured in clashes between looters, security guards, gang-members and the security forces.

Video posted on social media showed chaotic scenes in which crowds forced their way into shops to steal food, medicines and valuables.

“It was total madness,” said Ricardo Acosta, a vice president of a business association in the surrounding Zulia state.

At the city’s University Hospital, the scene in casualty was like something from a war film. Dozens of patients and their families were crowded into the sweltering ward, a few lying on beds, others slumped on the bloodstained floor.

The hospital is Maracaibo’s largest – and one of just two with their own emergency generators, although power was connected only in the emergency ward. www.theguardian.com

Japan reveals name of new imperial era will be ‘Reiwa’

Health officials in China‘s hard-hit central province of Hubei reported on Thursday that 242 more people died from the coronavirus COVID-19 as of Wednesday – the highest in a single day and more than twice the previous record high – pushing the death toll across the country to 1,355.

The province’s health commission also reported a huge jump in new cases, saying a further 14,840 people had been confirmed with the infection over the 24-hour period to midnight on Wednesday (16:00 GMT).

As this developed, the official Xinhua news agency reported on Thursday that the head of the Communist party in the province of Hubei has been relieved of his post – the latest in a line of local officials fired.

Hubei is at the centre of the outbreak, which is thought to have originated in a now-closed seafood market in the capital of Wuhan late last year.

Former Shanghai Mayor Ying Yong has been appointed as the new secretary of the Hubei Provincial Committee of the Communist Party of China, replacing Jiang Chaoliang, the report said, citing the party’s central committee.

Al Jazeera’s Katrina Yu, reporting from Beijing, said “it was expected that somebody’s head was on the chopping block”.

“There’s been a lot of criticism about the information not being so forthcoming” from Hubei officials, she added. (Via AlJazeera)

Basketball legend Kobe Bryant, 41, and his 13-year-old daughter Gianna Maria Onore Bryant were among nine people killed in a helicopter crash in Calabasas, California, on Sunday.

It’s hard to believe NBA superstar Kobe Bryant, whose prodigious talent and win-at-all-costs spirit made him one of the most famous and decorated athletes in history, is gone.

He was the rare celebrity who didn’t need a last name. Oprah. LeBron. Beyonce. Kobe. Everyone knew who you were talking about.
Still youthful at 41, Bryant — who died in a helicopter crash Sunday in California — looked like he could suit up and drop 30 points on a rival NBA team. It doesn’t seem that long ago that he was scoring 60 points in his final NBA game, soaking up the cheers of Los Angeles Lakers fans who worshiped him for two decades as one of the city’s favorite sons.
After his 20-year NBA career — all with the Lakers — Bryant is all but assured of being a first-ballot inductee into the Naismith Memorial Basketball Hall of Fame later this year.
“He was a fierce competitor, one of the greats of the game and a creative force,” said fellow NBA icon Michael Jordan, CNN Reports.
Continue Reading

Trump confirms he is considering attempt to buy Greenland

Donald Trump has confirmed he is considering an attempt to buy Greenland for strategic reasons, though he said the idea is “not No1 on the burner”.

The US president’s interest, reported earlier this week, was greeted internationally with widespread hilarity but with indignation in Greenland and Denmark.

The government of the semi-autonomous Danish territory insisted it was not for sale. The Danish prime minister called any discussion of a sale “absurd”.

Nonetheless, on Sunday White House economic adviser Larry Kudlow first confirmed the story in an interview, before Trump spoke to reporters as he left New Jersey to return from vacation to Washington.

Saying the “concept came up” and he was “looking at it”, the man who runs a notoriously leaky White House also questioned how the idea found its way to the press.

Trump sought to tie the idea of a US purchase of the world’s largest island – not including the continent of Australia – to his own area of professional expertise, saying it would be “essentially a large real estate deal”.

“Denmark essentially owns it,” he said. “We’re very good allies with Denmark, we protect Denmark like we protect large portions of the world. So the concept came up and I said, ‘Certainly I’d be.’ Strategically it’s interesting and we’d be interested but we’ll talk to them a little bit. It’s not No1 on the burner, I can tell you that.”

Add Pampanga News to your Apps?